Industry-leading displays have always been Apple's thing, especially so on the iPhones, and that's true on the 14 Pro Max as well. The Super Retina XDR OLED display has a 6.7-inch diagonal (the fine print says 6.69"), a 19.5:9 aspect ratio and the 1290x2796px resolution makes for a 460ppi pixel density. HDR10 and DolbyVision standards are supported, too.

It's a ProMotion panel, meaning it has a maximum refresh rate of 120Hz, which it can dynamically adjust depending on the use case, going all the way down to 1Hz for the newly introduced Always-On display feature. 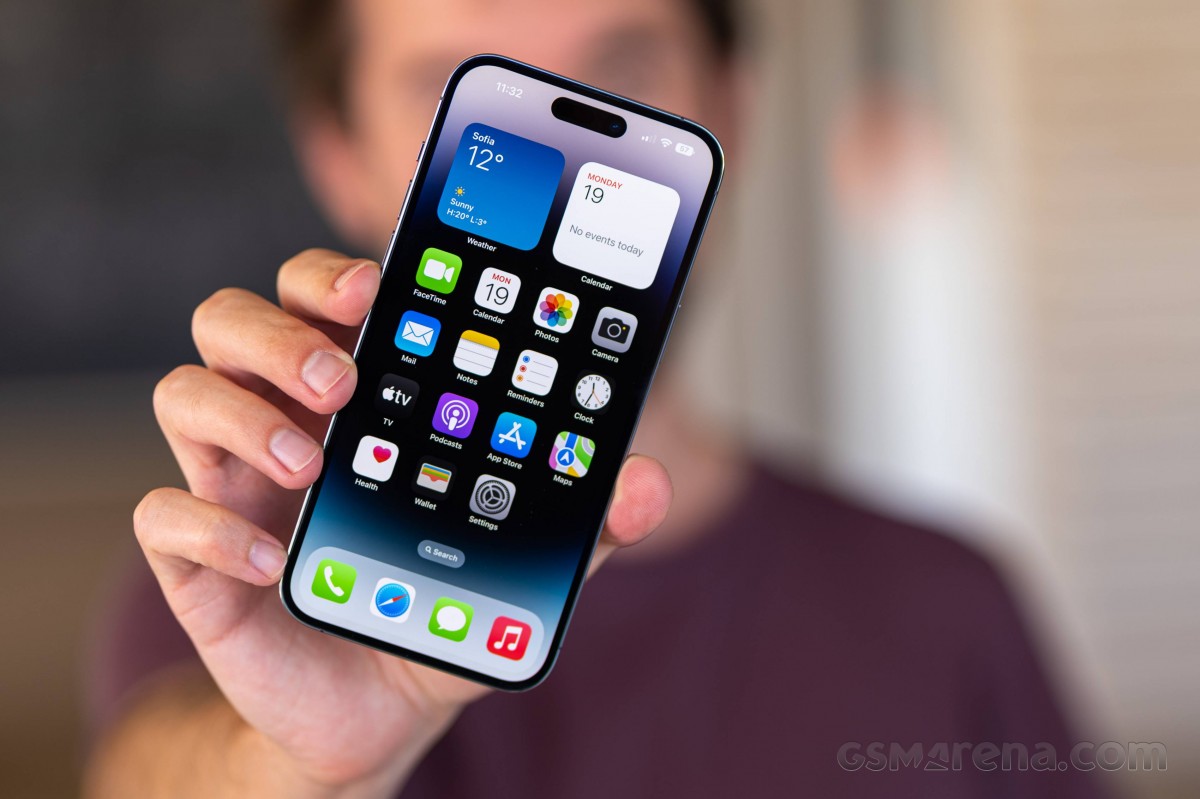 The 14 Pros lead the way in terms of brightness. Apple says that the display on the Pro Max should be able to shine as bright as 2000nits in outdoor conditions, while in less extreme surroundings, you should get 1000nits. The peak in HDR applications is quoted at 1600nits.

We don't measure the HDR brightness numbers, but in our simulated outdoor scenario with the adaptive brightness turned on, we got 1760nits - okay, a little short of 2000, but how can we complain when the next brightest phone (not counting the 14 Pro non-Max, of course), the Galaxy S22 Ultra, is some 500nits less bright?

When adjusting brightness manually, we measured 828nits on the 14 Pro Max - that doesn't sound quite as impressive, but phones don't usually let you have that brightness outside of auto modes in bright ambient lighting. That is to say, Galaxies now do give you 800-ish nits starting with the S22 series if you enable the Extra Brightness toggle in settings, but that's about it. Until last year, iPhones would let you have all the nits they can put out without limiting things to adaptive brightness mode, but with the 13 Pros' ability to go above 1000nits, a cap on the manual brightness was indeed warranted, and it's all the more understandable on the way brighter 14 Pros.

To sum up the brightness talk - a spectacular showing from the iPhone 14 Pro Max.

As usual, this iPhone gets high praise for color accuracy as well - we got an average dE2000 of 0.8 when testing with sRGB color swatches. It's not the Apple way to give you options, so the 14 Pro Max doesn't have different color presets, but it will switch between sRGB for general use and Display P3 (Apple's sort of DCI-P3) for wide-gamut scenarios.

The iPhone 14 Pro Max has a 4,323mAh battery inside, a 29mAh downgrade compared to last year's model - so the same, basically. That's also the same capacity as the 14 Plus, and some 35% more than the 14 Pro non-Max. Capacity comparisons against competing Android handsets are mostly pointless, but just for some perspective, the Galaxy S22 Ultra's cell is rated at 5,000mAh.

In our testing, the iPhone 14 Pro Max was generally better than its predecessor with the screen on. We clocked 23:39h of Wi-Fi web browsing (three and a half hours more than the 13 Pro Max), and 24:38h of offline video playback (a less significant 30-ish minutes increase). We timed practically identical call longevity this year at 27:23h (27:26h on the 13 Pro Max), while standby performance took a small dip. All of those work out to the same overall Endurance rating of 121h. 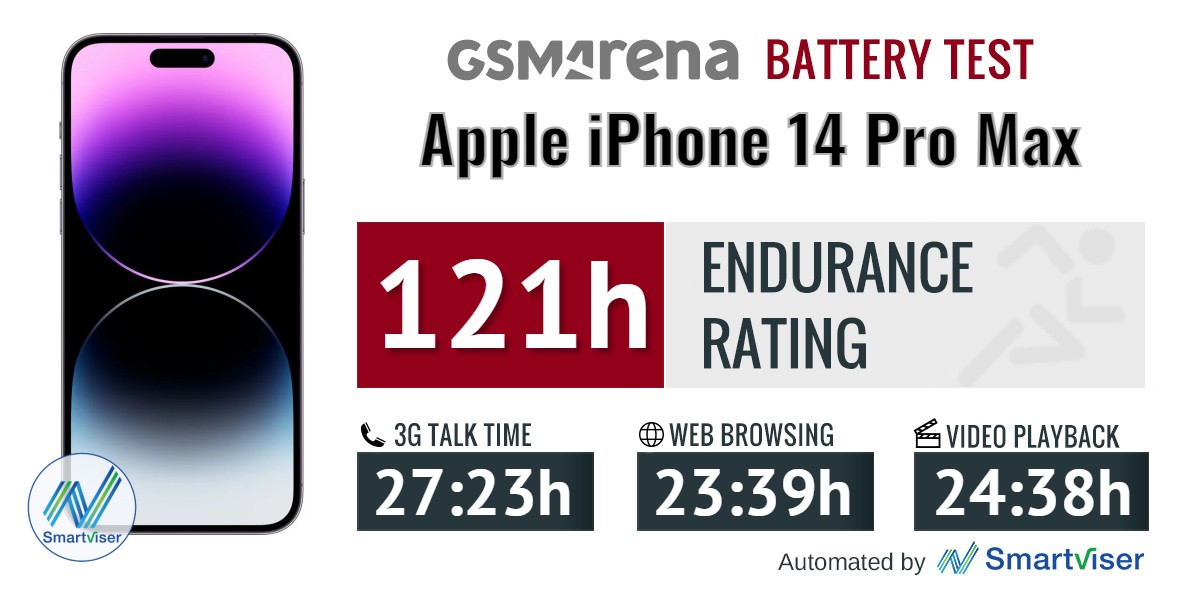 Our battery tests were automated thanks to SmartViser, using its viSerDevice app. The endurance rating denotes how long the battery charge will last you if you use the device for an hour of telephony, web browsing, and video playback daily. More details can be found here.

Video test carried out in 60Hz refresh rate mode. Web browsing test done at the display's highest refresh rate whenever possible. Refer to the respective reviews for specifics. To adjust the endurance rating formula to match your own usage - check out our all-time battery test results chart.

There's no charger in the iPhone 14 Pro Max's retail package, though some carriers do bundle one of Apple's 20W units. That does sound like the go-to option if you don't have any other USB PowerDelivery adapter to power your iPhone, so that's the one we tested with. 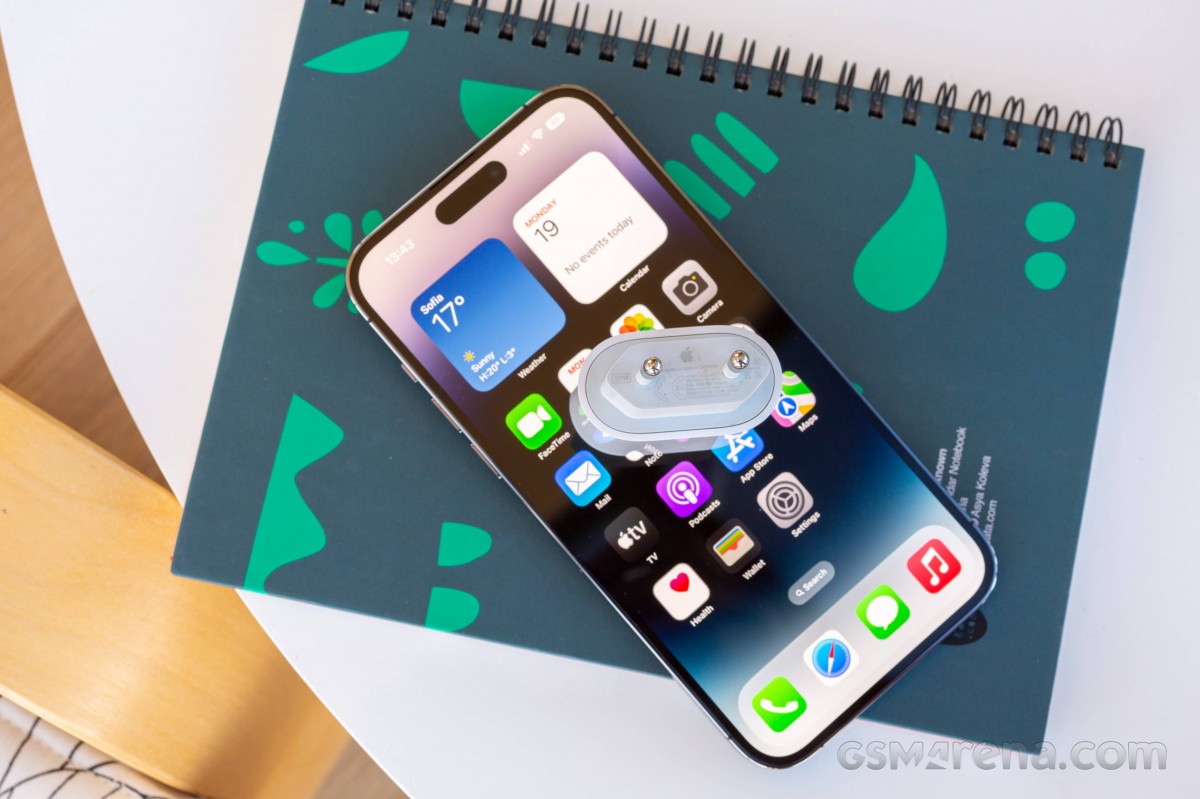 The iPhone 14 Pro Max supports wireless charging up to 7.5W with generic Qi-compliant charging pads, but you won't find it listed in the WPC's database. Apple would prefer you to use their MagSafe magnetically attached accessory ($39/€49 for the puck with the cable, and you still need a power adapter), which should max out at 15W.

If you want to get the maximum longevity out of your iPhone's battery, the Optimised Battery Charging toggle in settings should help. It allows the iPhone to adapt its charging curves to your charging patterns (mostly related to overnight charging and your sleep routine), so it minimizes the time the battery spends at 100%. It will charge quickly (well, iPhone-quickly) up to 80% and will then only finish things off just before it thinks you're going to need the phone.

The 14 Pro Max has the usual hybrid stereo speaker system you'd find on an iPhone - the dedicated speaker on the bottom is joined by the earpiece to make up a stereo pair. The earpiece is served the right channel in portrait orientation, while in landscape, the output is adjusted to match the phone's orientation. In any case, each speaker will still output some of the 'opposite' channel, but at a much lower volume.

In our testing, the 14 Pro Max earned the same 'Very Good' mark for loudness as the 13 Pro Max, a notch above the 14 Pro's 'Good'. In terms of perceived sound quality, on the other hand, the 14 Pro Max is excellent as usual. We're getting some pronounced low-end thump, clean vocals and sparkly treble. The Galaxy S22 Ultra, for one, is nowhere as good.

Use the Playback controls to listen to the phone sample recordings (best use headphones). We measure the average loudness of the speakers in LUFS. A lower absolute value means a louder sound. A look at the frequency response chart will tell you how far off the ideal "0db" flat line is the reproduction of the bass, treble, and mid frequencies. You can add more phones to compare how they differ. The scores and ratings are not comparable with our older loudspeaker test. Learn more about how we test here.