2017 for some, Pro for others - seemingly identical Galaxies come in a number of different, market-specific flavors this year, and we now have the Galaxy J7 Pro for review. An offshoot of the ever-growing J7 family, the Pro is meant for India, South East Asia and Brazil, each of these getting a (very slightly) further localized version. 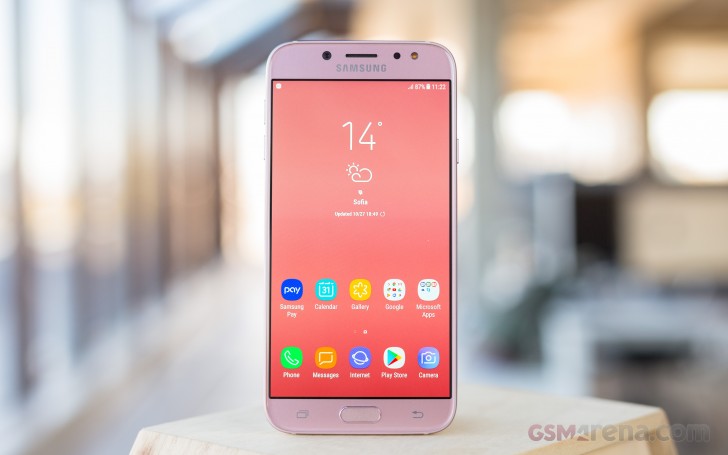 We'll be reviewing the J730GM/DS version, the GM signifying it's the one for India if you're to blindly trust Samsung's websites. As the DS lettering indicates, it's a dual SIM phone.

The rest of the Galaxy J7 Pro is very much like the J7 (2017), which we've already reviewed. You're getting a Super AMOLED 5.5-inch display with pixels galore - alright, it's FullHD, but most of last year's J7s were 720p. Coming straight from last year is the chipset, but then the 14nm Exynos 7870 was ahead of its time back then - for a midrange SoC, that is - so it still makes sense in 2017 and will probably remain relevant in 2018, too.

Our review unit comes with 3GB of RAM and 32GB of storage, but 64GB versions are also available. You can theoretically save some cash and get this 32GB version, as there's a microSD slot, fully dedicated one at that so you won't be sacrificing the second SIM slot.

We weren't exactly thrilled about the camera when we reviewed the J7 (2017), but it got the job done, and the Pro receives the same 13MP f/1.7 setup. For selfies, you're also getting 13MP resolution and a flash.

With all the good stuff the Galaxy J7 Pro shares with the J7 (2017), there's no escaping the cons. For one, the sizeable 3,600mAh battery will take ages to fill up without any fast charging. And the power-efficient chipset isn't all too powerful, particularly in the graphics department - the Galaxy J7 (2016) could get away with it since it's got a lower-res display, but the FullHD displays of this year's J7s would be happier with a bit more oomph.

And the one that seems the easier bit to resolve - the microUSB port used on the Galaxy J7 Pro should have been USB-C to keep up with the times. But hey, you can't have it all, it seems.

We'll be unboxing the Galaxy J7 Pro on the next page, followed by the usual assessment of the design and controls. Hit that 'Next page' and let's get going.

Thanks i get it happy new year

Ive been using my j7pro since DEC 23,2018 until dis year until such time i drop it accidentally dropped dis Aug. and the only concerned for that phone cos the storage it keep popping that isn't enough memory even if you keep deleting some a...

yes it has multi window