MediaTek is perhaps best known for its smartphone chipsets, but the company also designs chips for Chromebooks and other smart devices. And it has a successful line of 5G modem, offering an alternative to Qualcomm and Samsung modems.

Today MediaTek unveiled a fast new 5G modem that promises speeds up to 7.9Gbps. Also, a couple of chipsets for mid-range Chromebooks and one for premium 4K TVs.

A follow-up to the T700, the MediTek T800 is a fast, efficient 5G modem. It supports both sub-6GHz and mmWave operation on StandAlone (SA) and Non-StandAlone (NSA) networks. And it can be used in dual-SIM configurations (with dual standby support).

The modem is built on a power efficient 4nm node. It natively supports PCIe and USB host interfaces, but can be connected to the rest of the machine through other means as well.

This pair of chips is aimed at Chromebooks and is nearly identical – the T528 just runs at higher clock speeds. Note that these are aimed at more affordable offerings, for premium Chromebooks the company has the likes of the Kompanio 1380.

Graphics are handled by a Mali-G52 MC2 2EE GPU, plus a multimedia engine that can decode VP9 and H.265 videos. Additionally, there is support for cameras up to 32MP and a HiFi-5 DSP for low-power microphone audio processing.

The first Chromebooks powered by the new Kompanio T520 and T528 chips are expected in the first half of 2023.

This chip is aimed at flagship 4K TVs with up to 120Hz displays. It supports Dolby Vision IQ with Precision Detail and can even process multiple Dolby Vision streams in parallel. The chip will allow TVs to show up to 8 video streams simultaneously.

Also, it is built with gaming in mind. It supports Variable Refresh Rate inputs at up to 4K at 144Hz and has Auto Low Latency Mode (a standard defined by HDMI). Additionally, the chip is ready for some game streaming from the cloud with low-latency Wi-Fi 6/6E connectivity built in. 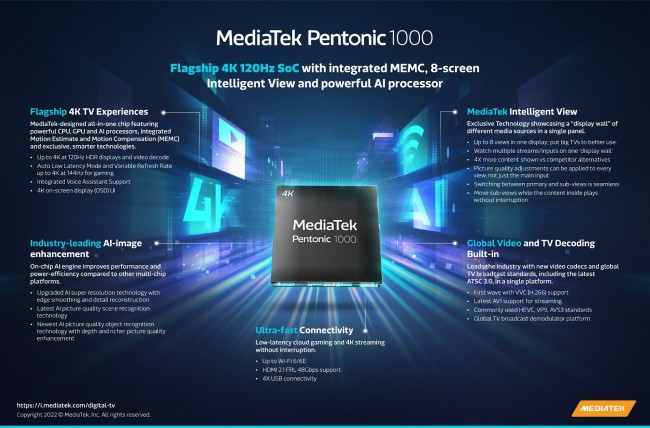 For video streaming the chipset is among the first to support the upcoming H.266, aka VVC. It also handles the usual HEVC, VP9, AVS3, as well as AV1. Dolby Atmos sound can be paired with the Dolby Vision imagery.

The first TVs with the Pentonic 1000 are expected in the first quarter of 2023.

The incredible speed offered by Mediatek in the new 5G modem is truly impressive - can't wait for devices powered by it in 2023.

I didn't even know H.266 existed. Some chips stillstruggle with 265